Shop-Script has been updated to version 5.1.1. What's new in this release:

The first official release of Shop-Script 5 is available for installation! We have also updated the project's website at www.shop-script.com, so you can buy the new application or try it free of charge by creating your own hosting account.

This is an important moment in the history of the Webasyst framework, because at the very beginning the framework project was initiated mainly due to the necessity of making the previous version of Shop-Script (WebAsyst Shop-Script) better adaptable to individual customer requirements. With Shop-Script 5 released, the migration of WebAsyst applications from webasyst.net to the framework platform will occur much faster, because Shop-Script 5 has already brought more essential functionality to the framework than there ever was in previous platform versions.

Shop-Script 5 has been being developed very actively during the last several months. Almost all of our development team was involved in preparing this release. Now we are close to releasing new functionality for Shop-Script 5 and will make some of it available in the next software updates, including the following:
— CSV import/export of products
— Order SMS notifications
— New design themes including a storefront theme for Facebook
— Shipping rate calculation modules FedEx, DHL, UPS, USPS
— Payment modules Google Checkout, PayPal Express Checkout, and others

An interesting note for web developers: we have opened a private repository for Shop-Script 5 on GitHub and are inviting programmers and web designers for collaboration in development of new applications, plugins, design themes, and other addons for Shop-Script 5 and the framework. Access to the repository is granted individually and free of charge (you do not need to purchase a license). Submit your requests at http://www.shop-script.com/developers/.

And one more thing: If you have already moved or are in the process of moving your online store to Shop-Script 5 and would like to share a link to it, simply add it in the comments below. We shall publish links to most interesting projects both at shop-script.com and in this blog.

Shop-Script 5 has been updated to version 5.1.0. What's new in this release:

Today we have released an update for Shop-Script 5 with several important changes: 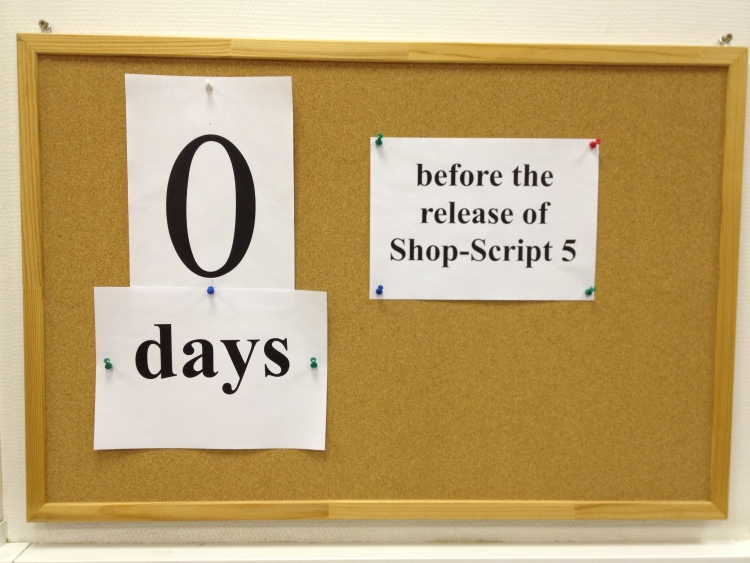 One month remains before we begin sales of Shop-Script 5 (on March 12, 2013), and today we have started to deliver the new product to those who have placed a pre-order.

This is a long-awaited and very important moment for us. We have been working on this version for several years. Even though development of the main functionality of Shop-Script 5 has taken us a little more than half a year, its main platform, Webasyst framework, has required considerably more effort and time for designing, research, development, and delivery to end-users. Shop-Script 5 is the result of our work over the last three years (since the beginning of 2010).

So, today we begin to deliver Shop-Script 5 to you and will complete the delivery in several steps.

Within the next several days Shop-Script 5 will become accessible for all of you who have placed a pre-order or have purchased WebAsyst Shop-Script from December 12, 2012 though January 31, 2013. We shall offer continuously open access to the product to limited groups of our customers. First of all (effective today, on February 12th), the product will be delivered only to several developers who are well familiar with WebAsyst Shop-Script and the Webasyst framework (!); shortly after this first “test”, access will be granted to all of those who have placed a pre-order for Shop-Script 5. For most of our customers this will happen on February 13th or 14th.

We have decided to deliver the product to a limited number of developers at first, in order to test our updated application delivery mechanism for Webasyst apps and to try the data migration utility from WebAsyst Shop-Script to Shop-Script 5 with real data. By now we have tested the migration functionality with a large number of test online stores; however, we believe it necessary to run a number of further tests with real online stores. This is the reason we have opened access to the very first version only to developers who are already familiar with the framework.

If Shop-Script 5 is not yet available for installing in your Customer Center, please be patient, it will be there very soon. We shall inform of its availability by email.

As we wrote in the initial announcement of Shop-Script 5, the functionality of the first (preliminary) version of Shop-Script 5 does not contain several functions or modules. Among these missing functions are affiliate program, sales reports, customer account, mobile backend version, many payment and shipping modules currently available in WebAsyst Shop-Script, CSV import and export. We have not included these functions in this pre-release for the following two reasons.

I must admit that we have been short of time for transferring and thoroughly testing all the functions which we have developed during many years for WebAsyst Shop-Script. The product is very complex and there is no real reason for hurry. Development of several payment, shipping, and data import modules have not been completed, and we are working hard right now to make them available very soon.

Secondly, some key features of an online store (e.g., the affiliate program) have been implemented in the form of plugins and have been completely removed from the core of Shop-Script. It was an intentional act not to include many of such, completely developed, modules in the product distribution with the view to deliver them later as ordinary updates to the installed Shop-Script 5, similar to the way other modules written by third-party developers will be installed. All such addons and software updates are installed in one mouse click using the Installer application without interfering with the operation of your online store.

You can begin setting up your store, add any data, and modify design templates; all of this will be preserved when such updates are installed.

Our efforts during preparation of this pre-release version of Shop-Script 5 were aimed at creating a software platform for creating online stores and a developer platform for programmers. Exactly from this point of view should Shop-Script 5 be looked at today. The product already has all key elements which usually require customization for individual customer requirements: storefront design, plugins, shipping and payment modules (e.g., “Courier” and “PayPal” modules).

Developer documentation for Shop-Script 5 is available at http://www.webasyst.com/framework/docs/shop-script/. This new section currently contains articles about creating shipping and payment modules for Shop-Script.

During further work on Shop-Script 5 will shall be mostly focused on how to make the product convenient for customization to satisfy various customer requirements. Shortly, we shall release several plugins, publish documentation on hooks (events), write a tutorial on creating your own design theme and integration of an online store with other framework-based applications, and will try to answer all your questions.

We are very grateful for all your feedback and suggestions regarding the development of Shop-Script 5. Please email us at support@webasyst.com or post your queries in the dedicated forum section at forum.webasyst.net.

Step 3. End of February and beginning of March 2013. Plugins and functionality.

We shall release and deliver via the Installer all previously announced functions for Shop-Script 5. All updates and plugins are installed via the web interface in one mouse click.

After the release we shall continue working on further development of Shop-Script 5 and will add more useful functions and design themes.

Among the key points which differentiate Shop-Script 5 and the Webasyst framework from everything we had before is the application and extension store, which we are planning to open on the basis of the Installer app. Third-party developers will become an opportunity to publish their own products (plugins, design themes, shipping and payment modules, applications) in the application store for payment or free of charge; these products will automatically become available, via the Installer, to any user of the Webasyst framework or Shop-Script 5. It would be a service similar to App Store and Google Play, for Shop-Script and other framework-based applications.

We recommend that developers consider Shop-Script 5 as a ready-to-use platform, which can greatly facilitate creation of online stores both as customizable software and as an out-of-the-box solution.

As the head of the Shop-Script project I am happy to express my gratitude to the entire development team. During the last several months (especially last weeks and days) we have carried out a huge amount of work. It is a pleasure to work among those who sincerely desire to make a really high-quality software product.

I can see that we are about to release one of the best shopping cart platforms among those existing today. We have an excellent team and a real chance to achieve outstanding results. I hope that our plans and efforts will meet the expectations of our customers and will help them earn even more on the Internet, with greater pleasure.

Please send your questions to support@webasyst.com

All inquiries about Shop-Script 5 are forwarded
to the developer team.

We are thrilled to expose the next big thing we’ve been working on during the last several months. It is Shop-Script 5, the long-awaited successor in the Shop-Script software family.

Enough talking! Visit the new Shop-Script 5 website and see it with your own eyes: http://new.shop-script.com.

History of the Shop-Script project

While our team is busy developing the Webasyst framework, new Shop-Script  and other apps, I will tell you how the Shop-Script project began.

I began to write Shop-Script in the fall of 2001, more than ten years ago. I was then a second-year student in the Faculty of Computational Mathematics and Cybernetics at the Lomonosov Moscow State University, and decided to learn PHP. I wrote programming code evenings in the university's dormitory, and completed the first version in about one month. The idea of writing a shopping cart script grew out of my desire to create something useful with PHP and to earn some money.

If you are interested, you can download that very first version which I sold for $49 until 2004: Shop-Script 1.0 (ZIP archive; 70 KB). The script was clumsily designed from the very beginning, and was written as a spaghetti code; however, it required absolutely no time to get into the code organization. You could immediately identify which file to edit by its name. At that time I was not very concerned about source code organization issues. All projects which I had completed before Shop-Script were mainly of academic nature: interesting algorithmic problems rather than large commercial projects. I had never developed any web-based applications before. All the same, the script was quite functional, and it sold, yielding some money which allowed me to keep working on the project.

We are excited to introduce the new Webasyst — an open source PHP framework for building sleek multi-user web apps, intranet solution for businesses and teams, and complex websites.

The framework is the successor to our company's products — WebAsyst.net and Shop-Script shopping cart software. Our dev team continues to re-write, one by one, all 10 web applications of the WebAsyst.net family so that all will work fully on the basis of our new framework. A brand-new version of Shop-Script, which is being developed on the basis of the new Webasyst framework, will be introduced in December 2012.